It’s Portland’s tech crawl tomorrow, where we all visit each others’ offices, admire the toys (reminder to self: must put some more air in the 7′ lobster), drink each others’ beers and try to persuade each others’ techs to work for somewhere with cooler toys.  My office is on the crawl, but rather than be the token female data scientist in there, I’m going to go out visiting.
I started by grabbing and formatting some data.
There’s no map of the crawl (yet),and I needed to know how far I’d be walking (I’m still recovering from my time in a wheelchair). There is a list of companies on the route , so I cut and pasted that list into a text file that I imaginatively named techcrawl_raw.txt.
Then I applied a little Python:
import pandas as pd
fin = open(‘techcrawl_raw.txt’, ‘r’)
txt = fin.read()
df = pd.DataFrame([x.strip()[:-1].split(‘ (‘) for x in list(set(txt.split(‘\r’))- set([”]))],
columns=[‘name’, ‘url’])
df[‘address’] = df[‘name’] + ‘, portland, oregon’
df.to_csv(‘tech_crawl.csv’, index=False)
This takes the contents of the text file, which looks like this:

Creates an array that looks like this (NB the order changed because I used set() to remove any duplicate entries):

Converts it to a pandas dataframe, and adds a new column with the company name plus “, portland, oregon”, then dumps that dataframe to a csv file that looks like this:

The code that creates the array is fragile (just one added space could break it), but it works for a one-shot thing.
And then I made a map.
Go to google maps, click on the hamburger menu then “your places”, “maps”, “create map” (that’s at the bottom of the page) then “import”.   Select the csv (e.g. tech_crawl.csv), click on “address” when it say “choose columns to position your placemarks” and “name” for “column to title your markers”.
You’ve now got a map, because Google used its gazetteer to look up all the addresses you gave it.  It won’t be perfect: I got “2 rows couldn’t be shown on the map” – you can click on “open data table” and go edit the “address” field til Google finds where they are.

Here’s the map I created. 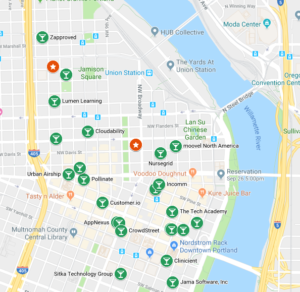 It’s a little fancier than the basic map.  To fancy it up, I clicked on “untitled map” and gave the map a name; I hovered over “all items” until a little paintpot appeared, clicked on that and chose a colour (green) and icon (wineglass).  I also clicked on “add layer” and added a layer called “important things”, used the search bar to find the start and afterparty locations, then clicked on the icons that appeared on the map, then “add to map” and used the paintpot to customise those too.  And that was it.  One simple map, about 15 minutes, most of which was spent creating the CSV file.  And a drinking <del><del> visiting route that I can walk without getting to exhaustion.
Making your own maps for fun is fun, but there are other more serious maps you can help with too, like the Humanitarian OpenStreetMap maps of disaster areas – if you’re interested, the current task list is at https://tasks.hotosm.org/