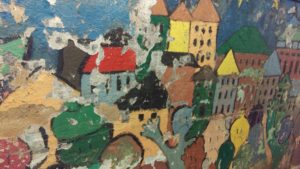 Auction theory is becoming important globally, as we discuss the effects of programmatic advertising on politics and beliefs around the world.  It’s also becoming important personally: I’m starting work on incredibly rapid, large-scale auctions as part of my new job on programmatic advertising. I’m interested in the human parts of this, and especially in the effects of bots and automation on human needs, desires and interactions. I was starting to wade into the theory behind that, when I decided to stop for a moment and apply my new rule to first think about what in my background could be helpful to the job at hand.
I grew up in the German and English countryside. Saturdays and Wednesdays were market days, and sometimes instead of going to the local town’s market, we’d go over to the farmers market in a nearby town whose bridge still bore the plate offering to ship anyone who damaged it to Australia.
By “farmers’ market”, I don’t mean the sort of thing found in Union Square, where farmers dress up stalls to sell veg, meats, honey, bread etc to city dwellers.  I mean a good old-fashioned market were farmers were both the vendors and the buyers.  Central to this market was the livestock auction: a whirl of animals being herded into rings where a barely comprehensible (edit: totally uncomprehensible despite years of trying to understand what the heck they were saying) auctioneer rattled off, seemingly without breathing, prices until each animal or group of animals was sold.  I loved standing there, watching the intensity of everyone involved, seeing small signals, small tells, gruff men (and a few women) holding game faces as they got the best sheep for a good price, as thy sold those sheep, or watched who was buying and how.  Most of the day, these men would hide out in the pub, coming out only when their animals were involved: there was a signpost, of the old-fashioned, lots-of-arrows-stacked-on-each-other kind, that flipped up the name of the animals currently at auction, angled squarely at the drinkers.  I remember that farmers wives were busy too, but across the road from the livestock: selling cakes and produce, competing with a similar amount of understated fervor. As a small girl who’d learnt to count playing poker (thanks Dad!), I was wonderfully invisible in the market, and could observe anyone that I wanted until my parents’ patience ran out (or they finished shopping for produce).
We also went to furniture auctions in the town: places of great wonder for a small child, with boxes full of potential treasures being auctioned off amongst antiques. I started to learn about techniques like sniping (bidding at the last moment), forcing another participant’s hand (I still use that sometimes to push up the prices in a charity auction – sorry!), reading a room for who’s likely to bid, understanding how people bid not just on single items but also how they bid on sequences of items, how to be gracious in my bidding (sometimes there are people who just deserve that item more) and, most importantly, knowing the difference between the value of something and the most that I’m prepared to pay for it (which may or may not be above its monetary value, depending on its other values to me). The poker lessons also came in handy here too (so many tells… sooooo many tells).
And then eBay, and online auctions. No physical tells to read, but still people showed their intentions through their auction behaviors, and many of the old behaviors (like sniping and forcing up bids) still held. eBay fed some of my collection obsessions (which reminds me, there are some Russian teacups I need to go look at), and honed my ability to search for things competitor bidders might have missed (misspellings, alternative descriptions, getting into the heads of potential sellers, searching and working in different languages etc etc). It’s where I first saw bidding with bots, and realized just how much of human nature you could start to anticipate and automate for.
Between these, I also worked on adversarial systems, as part of the great games of the Cold War and beyond, moving from counter to counter-counter and so on up the chain. That got me into systems of value and competition within those systems, and eventually into relative calculations of risk. These weren’t auctions per se, but many of the same game mechanics applied.
And now programmatic advertising: tuning algorithms to bid, sell, counterbid for the eyeballs and actions of humans. That’s a lot to think about, but it turns out I’ve been thinking about auctions in one form or another for a lifetime, and algorithms for almost as long. Will be interesting to see how much of my own art and experience I can insert into this.
PS this isn’t all old-fart memories: I’m reading through Krishna’s ‘Auction Theory” and other classics whilst building some much newer tools. More notes on the tech side of things soon.